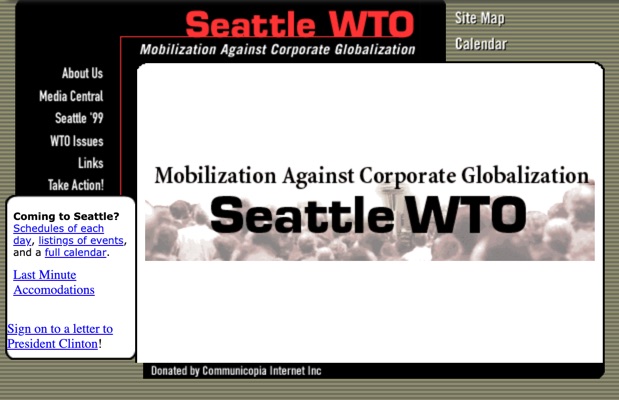 November 29 marked the 20th anniversary of the “Battle of Seattle”, and many are sharing their Seattle WTO memories. Our story of building the central website for the “Mobilization Against Corporate Globalization” offers a chance to reflect on how far digital storytelling and organizing has come in two decades.

My small digital agency in Vancouver made the main website used by organizers. We’d been building sites for six years by then – the web was about seven – but this one did more than all the others. While it looks pretty lame by today’s standards, we stumbled upon some cool innovations that have continued to shape the digital change space since.

The early days of the web were a heady time in all sorts of ways. In the non-profit tech world, websites offered NGO’s an incredible new way to tell their story, share helpful content, and build a constituency. Best of all, it allowed them to share directly, unfiltered by the mainstream media.

Informing people is a critical first step in building momentum for any new cause or movement. The critiques of the WTO process were complex, but the team behind Seattle99.org did a great job simplifying and unpacking them for an activist audience, so anyone could learn up fast, direct from an alternative source.

We also had your standard stone age action kit – an email address you could copy and paste, and phone number you could call. But then something interesting happened that made the site incredibly useful to the real work of the action.

Stumbling onto a powerful innovation

The story of how we got this project completed, for a chaotic distributed network of radical grassroots activists, in the days before reliable email or cell phones, was kinda nuts. This was not an easy project to pull off.

Somehow we got it done, and the site was launched a few weeks before the big show.

It had a detailed events calendar, so anyone could find when and where various actions were happening. Neat. It had a listing of all the affinity groups who were organizing their constituencies, and a map of the locations around town where they would be starting the rally. Cool cool.

Then someone asked us to throw together a simple (and ugly) link to an (even uglier) housing form. A place where locals could enter in their detailed lodging info and be hooked up with appropriate out-of-towners.

When travelling activists could make clear plans and be easily connected with lodging, this encouraged many more to come. It extended the work of the housing coordinator and other organizers to a new, previously unused place. Online.

And it worked. Really well.

The Seattle WTO rallies were one of the biggest mobilizations of a generation. Tens of thousands were on the streets for days with multiple coordinated actions, enough to effectively shut the conference down. Many of those travelled from outside Seattle, and used the housing form, affinity group maps, and events listings to get there, find the right people, connect, and make an impact.

The LA Times called it “the world’s first example of online organizing.” I’m pretty sure that’s not true, but still. We shut down the WTO!

Unless you can remember how rudimentary those early days of the web were, I imagine this whole story is pretty boring. Some content, a map, events listing, and an online form for god’s sake!

But for the times it was all pretty edgy. Seattle’s an innovative town, the energy around the WTO was massive, and we were all hungry for a win. When I look back now at 20 years helping organize and amplify countless rallies and actions, many of the early things we experimented with here ended up pointing a direction towards what we still do today.

(If you want to see how ugly, small, yet still amazing websites were, the WayBack Machine has a still working copy.