A theory of change that made the impossible possible 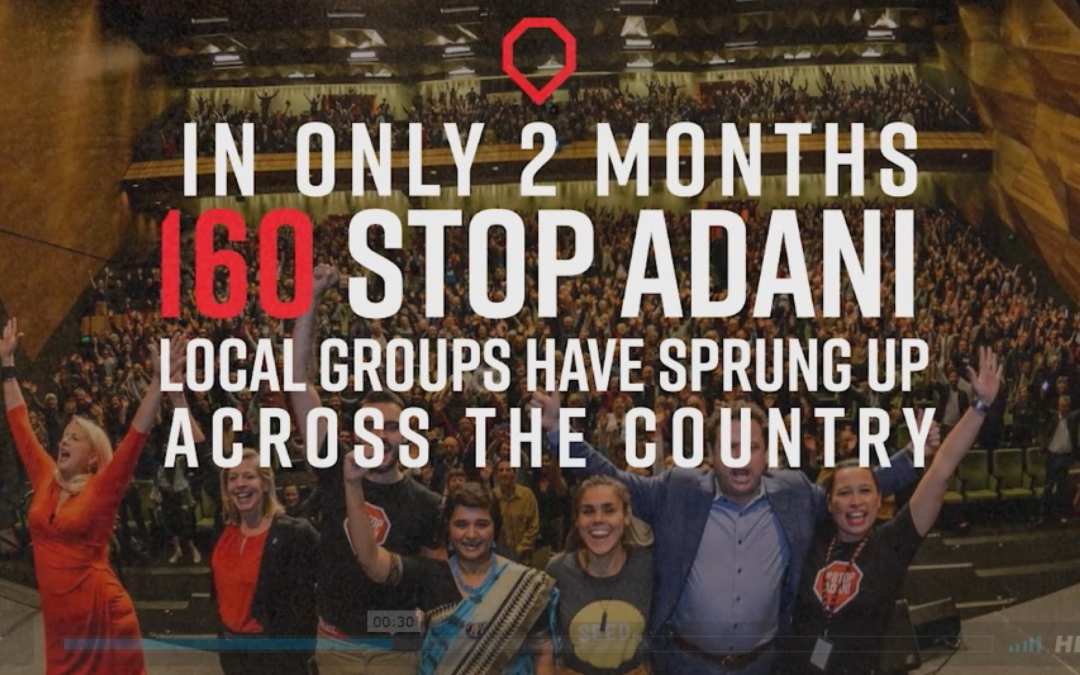 Of all the hot campaign trends from the past few years, the one that’s probably most commonly implemented on new campaigns is the “theory of change”. A critical part of storytelling and engagement, having a credible one helps smart but cynical audiences decide whether your impossible campaign is indeed possible, and thus worth their time and effort. And it’s a lot harder to make one than we usually think.

We’ve been supporting an impossible campaign most of this year, in Australia, where the nice folks down under have a not-so-nice addiction to coal (worth $55B to their economy, their 3rd biggest export). This past weekend in Queensland, where a new climate killing mega-mine would be dug, a state election was just won with the Adani coal mine the top election issue, and a surprise policy turnaround by the winning party may have just deal it a death blow.

A month ago, this same state government was the mine’s second most vigorous backer, after the coal loving / climate denying conservative federal government. So what changed? A killer campaign, that’s what.

Let’s unpack the “#StopAdani” campaign’s theory of change, and how campaigners actually made it come true.

If you want something big, directed-network it

What oil is to Texas and Tar Sands is to Alberta, coal is to Australia. This campaign had to not only stop a new multi-billion dollar mine (that would crack open a valley with another half dozen mega-mines behind it) it had to break an old industrial addiction that’s enriched elites for generations, and is embedded in the country’s founding story and mythology. Not so easy a task. 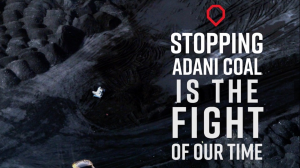 The first step in building enough power to not only win the battle but shift the wider culture on coal was to organize the #StopAdani campaign as a directed network. Encompassing the best of the diverse Australian climate movement, the campaign has begun to amass a potent – but distributed – counterpoint to the old power of the coal industry.

Due to the effort of so many, stopping this mine has now become a historic campaign. It’s not only united the passionate core of the climate movement, but found strong seams of support across demographic, partisan, and geographic lines. Working together, climate groups can go toe to toe with this powerful industry and its backers in government, putting them on their back foot and creating costly uncertainty.

Building the movement is always job #1

The first step in the campaign’s theory of change is “building the movement”. It’s such a common thing to say it’s almost cliche, but if we’re honest, it’s actually the hardest thing to do, full stop. This campaign was an organizing effort from the start – the website didn’t even have a petition sign up form – the only thing you could do to engage was join a local group. And join people did! Within only three months, more than 160 active #StopAdani groups had popped up across the whole country.

Then they gave local groups lots of important yet powerful things to do – organize film screenings, attend town halls, bank actions, (see below) phone calling days, and distributed days of action. Each action built capacity, story, momentum, and confidence until these groups became major force multipliers. Now the movement actually had teeth – the threat to follow its growing bark with a real bite.

Scalable actions to do at home

One of the challenges with these big national campaigns is they often lack local targets, but this campaign found the perfect one: believable, accessible to everyone, and emotional as hell.

Most of Australia’s mainstream banks had previously declared this project untouchable, but one of the Big 4 had stayed mum. Well guess what? There’s a bank branch in every town. If a bank walked its climate talk, they have to stop financing new fossil fuel projects, especially the world’s dirtiest fuel. And, finally, everyone hates their banks! The perfect distributed target was born.

Many thousands of local actions later, and literally just days before a well publicized week of action, the movement chalked up a clear victory when Westpac finally ruled out funding the mine. Not only did this embolden the movement, it became a great national story further opening up new political space around the future of coal in the 21st century. 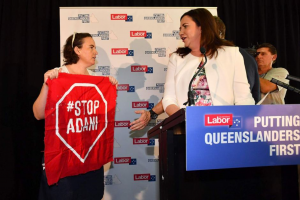 Many campaigners have a theory of change that relies on politics, ie some elected official “doing the right thing” and taking the necessary bold action. But there are two giant problems with that. As soon as you mention politics and politicians, regular people tune out. And when you’re dealing with a “wicked problem” like climate change, a clear-eyed power analysis quickly shows the enormous financial and other pressure most elected’s are under from industry to keep digging/drilling/growing at all costs, forevermore.

Simply put, to politicians, our movements don’t have enough power to scare them (or support them) into taking radically different actions that would upset the apple cart. So you don’t start at politics, you end there.

But even with real people power, electoral politics isn’t for the faint of heart. Parties hang onto their narratives with iron fists and regularly dismiss the ability of movements to truly help or harm them, so you need to insert yourself aggressively into the game to get noticed. 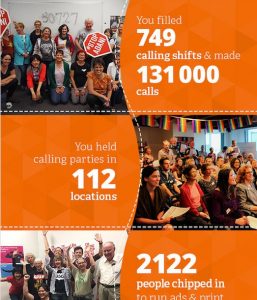 And insert themselves the Aussies did! In the lead up to last weekend’s critical Queensland election, one group lead the movement in making over 130,000 phone calls to voters. Another’s supporters knocked on thousands of doors. Another interrupted the Premier’s campaign kick off event, while hundreds more “bird-dogged” her and other senior politicians at almost every event. Campaign signs showed up everywhere, leading the issue to actually dominate the election.

All of a sudden it started to look like a negative in key electoral districts to continue supporting this mine so vigorously. And have no doubt, the movement were the ones to make that happen.

This pressure cooker caused the world to change in a previously unimaginable way – the Queensland Premier promised to veto the $1B loan. Now that she won, the campaign isn’t backing down, and are already working hard to hold her feet to the fire to implement her promise.

There’s a lot more to this campaign than the story above gets into, and unfortunately these fossil infrastructure battles rarely see permanent victories. But big picture, #StopAdani’s big directed network delivered on its big theory of change. They built a real movement. Then they used it to smash anyone who would finance the project. Then they pushed hard at pressure points to shift the political calculus. Together these “small” sources of power – from NGO’s, community groups, citizen leaders, and regular old people – added up to one big boom that changed the world.

How will your campaign do the same?