If you think all Network Orgs do are online petitions, you are wrong 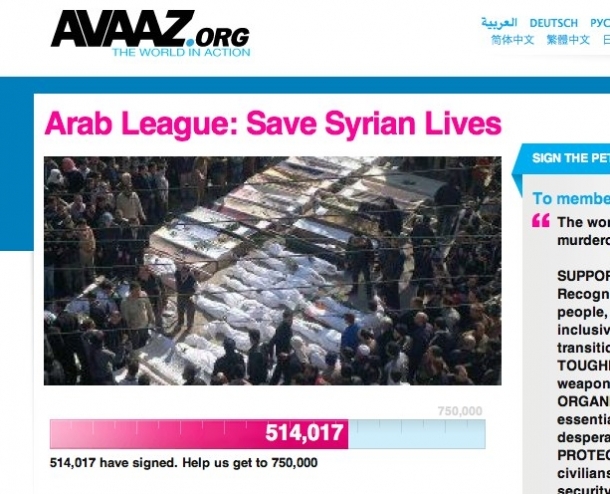 I’ve been writing a lot about “network orgs”, these small, largely virtual, hyper speed non-profits, often founded within the past 5 years, who are having an outsized impact on social change. Avaaz, MoveOn, and 350 are among the most common examples, but recently we’ve seen new ones pop up like mushrooms after a rainstorm in nearly every movement. Groups such as Presente, ColorofChange, SumofUs, Ultra Violet, and LeadNow in Canada are scaling very quickly, and rapidly starting to shift the dynamics in their fields.

But one of the common critiques I hear about them from those who work in more traditional non-profits is “all they do are online petitions”. This then connotes their work with simple clicktivism, also known cynically as “slacktivism”, and nothing more weighty than that.

Petitions are the gateway to real world action

I’ve long known this was an overly simplistic judgement, but now the evidence is stating to pile in. Check out this mindblowing profile on Avaaaz from the BBC yesterday about their recent wins in Syria and around the world. Avaaz is now the world’s biggest online advocacy organization with 13M members and growing. The profile lays to rest a lot of the misconceptions around what they actually do, far beyond their entry level online petitions.

Here’s how some of their efforts have impacted global issues over the past few years:

These bold moves used creative real world tactics that still leveraged their network’s online critical mass. But even a tried and true online petition, when applied at the right time and amplified by the media attention already on a big issue, can help tip an issue. Just look at their role helping stop the crazy SOPA Internet privacy bill last month, which was their largest online petition yet at 3.5M people (!).

Let’s shift to another of my favourite network orgs, 350, and what they’ve pulled off in the last few months. Many know about their leadership role in creating the campaign to stop the Keystone XL pipeline. Two weeks ago they led an effort to organize 35 different environmental groups of all sizes to collaborate on a “24 hour petition” that they delivered to the White House, to show there was massive public support to kill the pipeline for the 3rd time.

This effort of aligning the online petition actions of many groups aggregated an astonishing 800K signatures in 24 hours! 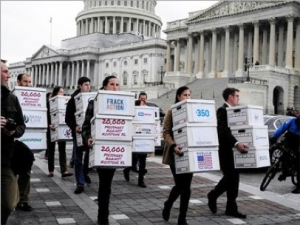 One of my clients in the coalition had over 80K people sign their version of the petition (their best numbers in a while), and how nice for them to get a 10X magnifier on their efforts by working together. Incidentally this is something I challenged the movement to do last year after my experiences on the TckTckTck climate campaign in 2009 and seeing the value of aggregating petitions first hand.

That year I worked closely with both Avaaz and 350, helping them pull off some of the biggest distributed event actions we’ve yet seen on the planet. Avaaz organized over 2,600 events in 134 countries, on 3 weeks notice, and got climate change and the Copenhagen summit on the global agenda. A month later, 350.org organized the world’s biggest distributed protest (or art piece, depending on who you ask) whose 5,000 events in nearly every country turned 350 ppm into the “biggest story in the world” according to Google News that day.

Getting creative to get it done

So sure these orgs tend to run a lot of petition campaigns. It’s how they build their lists, it gives people something to do when they don’t have much time to offer back, and often, when the target is focused and there is already some media attention on the issue, they have impact.

But these groups have other important core competencies such as listening for cultural moments, focusing their targets on real pressure points, aligning their work with very targeted media outreach, online movement building, esp through social media, and working with and supporting highly engaged volunteers.

Look, I’m also aware of the many limits of network orgs. They are small. They don’t tend to have deep expertise on any one issue. They don’t do the long term policy work that can get issues on the agenda. They don’t run direct service programs that help people in need. They don’t participate in a lot of government or multi-lateral planning exercises where independent NGO voices are critical to be heard.

But to dismiss their work as simple online petitioning misses the point. What these folks are doing are organizing – and leading – using the tools of our times, and combining them with political savvy and whatever creative real world tactics it takes to win in this topsy turvy world. And that deserves our respect.

Jason Mogus is Communicopia’s principal consultant and is the founder of Web of Change. He has been developing digital strategies for social change organizations for over 15 years. You can follow him at @mogusmoves.