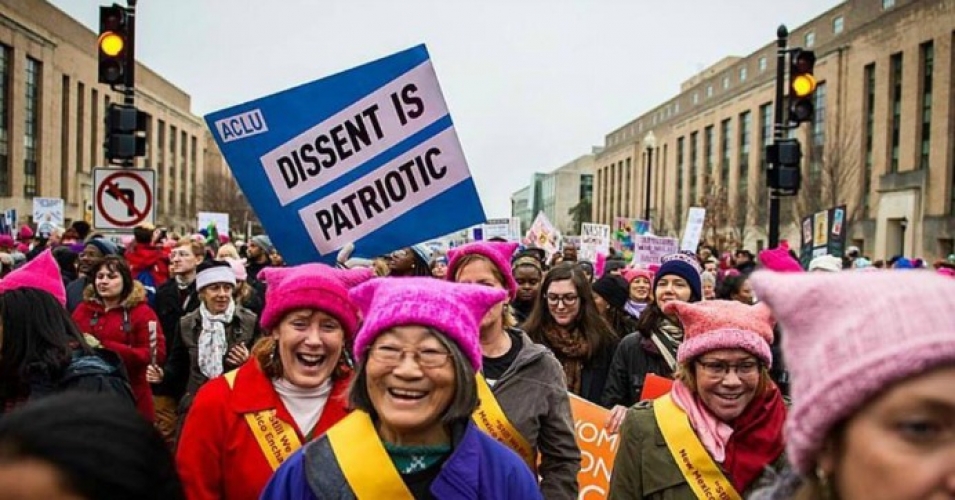 As reported earlier, we’re fully embarked on a deep dive into distributed organizing this year. Not only have we been fans of the approach for a while but we’re now seeing that this people-powered strategy has come of age and is being deployed by a growing number of major NGOs: ACLU, Sierra Club, Consumer Reports and the Union of Concerned Scientists, to name just a few.

These “building blocks” are common elements of campaign design and strategy that have helped distributed campaigns scale, run efficiently and score some impressive victories. We have already tested this tool successfully in workshops and live campaigning environments but are now making it freely accessible to campaigners everywhere as a download here! 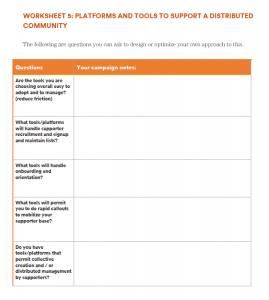 Our worksheet breaks down the six strategic elements and practices behind most successful distributed organizing campaigns. The tool is designed to convey the basics and to lead you and your teams to design or optimize your own practices by checking them against those of other leaders.

Here is an overview the building blocks presented within for the busy skimmers among you:

Organizations that have launched successful distributed organizing campaigns have established messaging and campaign framing that makes it clear that supporters are the key players in their efforts and that people power is absolutely essential for campaign success. In other words, the campaign needs supporters to step up and become heroes! This is more than a messaging issue. It involves thinking of a people-powered strategy as core to campaign design and the overall Theory of Change. It also involves making that Theory of Change clear to everyone from their first experience of the campaign…. (download worksheet to read more)

As opposed to traditional staff-led campaigns, where supporter involvement is usually an afterthought – ie. “please share this thing we created” – campaigns that plan to make use of distributed organizing put the people-powered process at the center of campaign design…(download worksheet to read more)

Establish a recruitment and onboarding process

In a distributed campaign, supporter time and energy is your primary resource. This means that a good amount of planning should go into thinking of ways to recruit highly-engaged people from your base or from outside your existing networks. It also means that an onboarding process should be set up in advance to welcome new recruits, maintain their enthusiasm and transmit the basic knowledge and skills they will need to start actively participating in the campaign…(download worksheet to read more)

Set up coaching and support for distributed supporters

Time and time again, groups deploying distributed networks have found that a totally hands-off approach to their supporters is not helpful because movement ties and morale break down over time and people tend to drop off. Regular interactions and support are essential in distributed organizing, especially as the network grows. These interactions can happen between central staff and active supporters or between highly-engaged supporters acting as mentors to new joiners….(download worksheet to read more)

Platforms and tools to support a distributed community

From what we see out there in the world, technology supporting distributed organizing efforts serves largely as a connective tissue between organizers and remote groups and participants. The innovators who have made such systems work for large organizations are certainly tech-savvy but not focused primarily on digital technology. Rather, they display a utilitarian approach to the platforms they work with, often choosing tools that are simple to adopt, affordable to own and already used by a large segment of their peers….(download worksheet to read more)

Define the milestones + moments of a distributed campaign 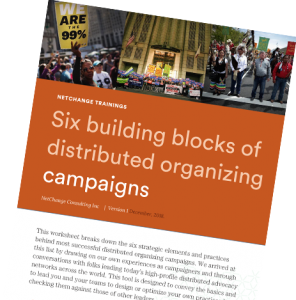 A distributed network may contain many semi-autonomous groups that plan and lead their own activities some of the time but once in a while, it’s important to align all groups around certain milestones or moments of truth. This can take the form of ‘days of action’ that synchronize activities from every group in the network at certain dates or some kind of collaborative project, where all groups contribute to a larger whole.

Our worksheet has been used in multiple live campaigning environments and as a learning took in our workshops. It is now available as a free download.

For more hands-on support, contact us for more information on our workshops and coaching offerings, as well as pricing, and available dates.