Do online petitions change nothing? Change everything? Bill Moyers investigates 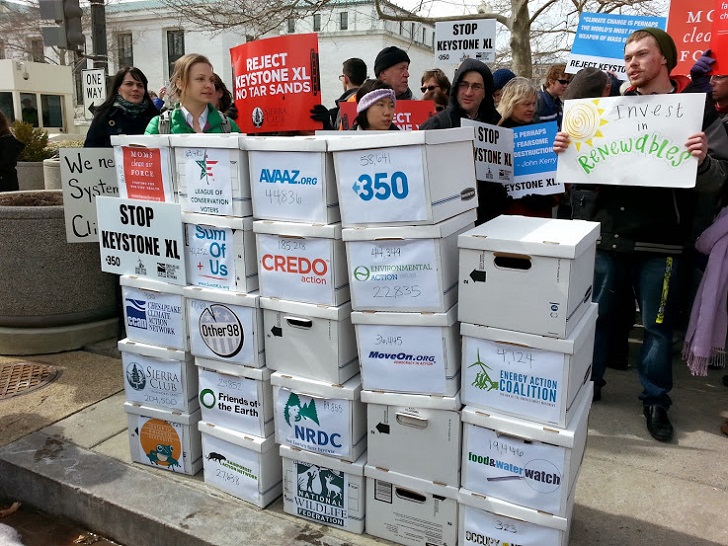 It certainly comes as a surprise to me that, in 2016, we’d still be talking so much about online petitions.

I remember one of my first Web of Change conferences in the early days of online advocacy, where I got to meet some “internet famous” colleagues from the US who were sitting on top of an (at the time) impossibly big list of 500,000 people because of a well timed and lucky petition. Or others who shared their business models how they “monetized” (ie sold) petition signers to advocacy organizations who had more money than luck.

Online petitions still anchor many of today’s most successful advocacy campaigns, so we were grateful to be interviewed, along with a number of other smart Web of Change colleagues, for an in-depth Bill Moyers article on them. Here are a few highlights below, though the full article on the Bill Moyers website is well worth a read if petitions are critical for your work or cause.

On the framing and campaign strategy behind petitions:

Savvy organizations that launch online petitions will have what digital campaigners (and those who study them) call a credible “Theory of Change.”

“Signing a petition to end nuclear war or to solve climate change is pointless,” says Jason Mogus, a strategist and founder of NetChange Consulting. Instead, he says, an experienced organization will “anchor its work with a petition, but then it is up to the campaigner to design a strategy.”

The strategy needs more than a long-term, big-picture goal: It needs to be directed at a clear target — such as a person, government or company — and have a clear action it wants the target to take. Mogus, who worked on the successful campaign opposing the Keystone Pipeline, says President Obama was the target of that campaign because the pipeline required a presidential permit to cross the Canadian border into the US. The clear action Obama could take was refusing to approve the pipeline. And the big-picture, long-term goal was to cut down on the carbon emissions that would come from burning the tar-sands oil the pipeline would have helped transport.

“No petition, and no single act, will solve the climate crisis,” agrees Karpf. “It is too big, too complex. It will take too long. But a well-timed, well thought-out petition that draws public attention and gets a lot of people engaged will yield a residual list of people.”

On who signs them:

Kate Krontiris, a civic researcher and strategist affiliated with the Berkman Klein Center at Harvard, studies what motivates people to engage in civic activity, whether through signing a petition or chaining themselves to the White House fence. One of her key findings is that 48.9 percent of the US adult population is made up of “interested bystanders,” They pay attention to issues and value civic engagement, but they find it difficult to publicly voice their opinions or take action.

Krontiris describes a hierarchy of civic engagement valued by interested bystanders that is analogous to a ladder. Simply sharing an opinion privately is the bottom rung. The next is the act of signing an online petition. Additional steps include voting, protesting and campaigning. Finally, at the very top, is organizing — when you’ve climbed so high within a movement that you become a leader, encouraging others to climb the ladder behind you.

On how to turn signers into leaders:

If you care about an issue, your job is not done after you sign, says Mogus. “Social change has almost never been made because of what [organizers] call ‘low-risk, loose ties’ types of actions.” The campaigners’ job is to show people how they can create change by breaking down overwhelming problems into winnable steps. “If they haven’t done that for you, I suggest you ignore their petition,” says Mogus.

“What they do with those signers afterward, how they recruit people to take leadership on the ground, how they deliver the petition, how they pull stories from action takers to highlight in the media or at public events — that’s when things get interesting,” says Mogus.

And some smart parting words for campaigners:

Petitions are only the beginning of a campaign. A strong petition helps fuel a fight that requires actual leadership, strategy, organization, funding and ongoing efforts from people who care enough to enter the fray after they add their name and hit “enter” on the computer.

You can read the full article on the Bill Moyers website.