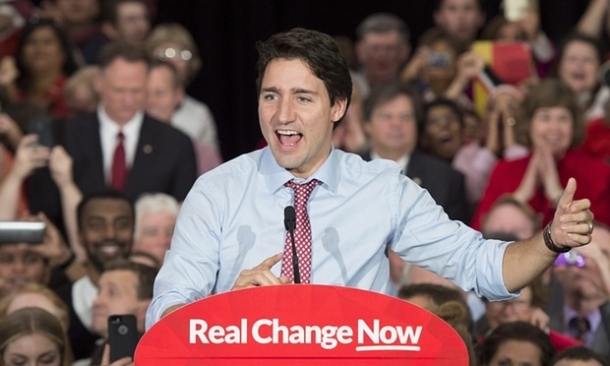 I spend my days pretty evenly split between US and Canadian work, and the questions I’m asked most often these past few years are simple: what the heck happened to you guys, how did it happen so quickly, and when will you come back to being nice again?

Well last night was the biggest Canadian election in a generation, and the first one that had Americans paying so much attention to it. Because a lot of you have asked whether the landslide victory of Justin Trudeau and his Liberal party means we’re back to being your calm, peaceful neighbour to the north, I thought I’d share my analysis from a movement perspective.

Last night was a major victory against the most effective and dangerous enemy progressives in Canada have ever faced. Harper was Bush and Cheney all in one, and he ruled Canada for a decade. From creating fear of non-existent crime and terrorism, state surveillance of activists, muzzling of government scientists, his well known energy superpower/climate disaster dreams to more subtle things like changing the core myths of our country from ones of peace to ones of war, Stephen Harper waged a very successful culture war on all fronts.

Harper created a hyper-partisan bureaucracy, governed only for his base, avoided all media or public contact, and actively attacked anyone who disagreed with him – including almost every single one of my clients in Canada.

While he largely succeeded in his meta goal of making Canada a more conservative country, (and sadly more fearful, divided, and racist) thankfully now that he is vanquished many of the most extreme elements of his agenda will lose steam.

The “nice businessmen” are back

So what about this Trudeau guy, and why are progressives, while greatly relieved, largely muted in our excitement about him?

First off while the Liberals talk a good game on progressive issues, history has shown time and again they campaign from the left and govern from the centre-right. The Liberals are the “nice businessman” party. Most of us believe Trudeau is a genuinely good human being. He’s young, he listens, he’s fair and from all accounts is a kind and genuine person. Compared to the last guy just having a “nice Canadian” back at the helm will be a huge change!

But the big problem from a movement point of view is Trudeau and his advisors are as steeped in neo-liberalism doctrine as they come. His party helped invent global trade agreements! The business elites of Canada, most have zero experience with race, class, or privilege, and they completely lack an awareness of the social, spiritual, and environmental crises that define the struggles of our times.

For the most part, like most nice Canadians, they haven’t shown any interest in leaning into all that messy stuff either.

Progressives had a chance to run the show

The third major party in Canada, the NDP, had the start of a plan to address a number of these crises, so most progressives are sad they have been reduced to a small, largely irrelevant rump of a minority party again. It’s been this way for most of time. It’s true their leader Tom Mulcair ran a campaign that was too economically centrist in the hopes of not scaring away the economic conservatives in Canada’s heartland, but his key people have deep progressive values and they would have done many radical things to make Canada a bold leader for our uncertain world.

A lot of really good people ran for office or supported those who did, and believed for the first time ever that rather than being the “conscience of Parliament” again with no power, they might form a truly progressive government of a global G7 nation. Most of those good people got washed away in the Crimson Tide and the few who did get elected are again voices in the wilderness.

The NDP has some real soul searching to do because it failed to present a truly progressive vision for what Canada could be and instead let Trudeau define it with milquetoast platitudes but no real meat.

So now the climate (aka tar sands) movement that I work for won’t get audited, surveilled, and publicly attacked as terrorists and enemies of the state. Scientists will be unmuzzled, First Nations and Muslims won’t be directly disrespected and the government will stop attacking charities and other critics. So yes in many ways we’ll be back to “Canada the good” again.

But do I expect the Liberals to do anything that would make Canadian business interests give up real power or our citizens feel uncomfortable? Sadly on issues of inequality, justice and climate action incremental change that doesn’t upset the neo-liberal power structure isn’t going to come close to building the world we need, as fast as we need it.

All in all October 19th was a happy day for progressives in Canada, because we just pulled back from the worst extremes of your poisoned Republicanism. The best news from the dark decade is a renewed sense of agency among civil society, that after years of being beaten down, we worked our butts off and against high odds destroyed the Death Star.

Our work now is to hold our new overlord’s feet to the fire on bedrock social issues, not following the example of Obama’s first term where civil society trusted him to do the right thing on his own, but that of his second where we pushed him hard to move on the issues that mattered most.

So now at least we have someone to meet with.