The first principle that unlocks all the others 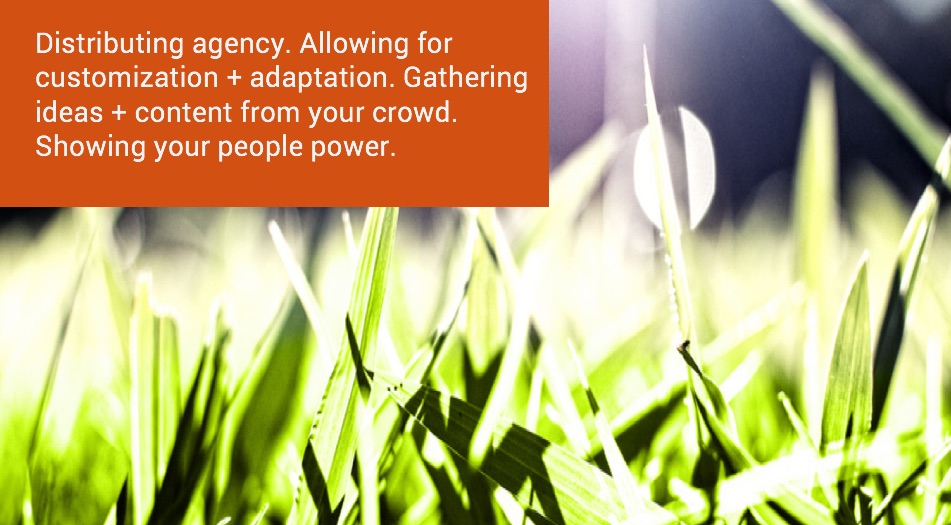 The four principles of the directed-network campaign model aren’t necessarily shared in order of priority, though some are so foundational that you can’t do anything else unless those are in place. Opening to people power is one of those, because if you don’t start by deeply valuing and actively building people power, a groundswell of people are unlikely to follow you along for the rest of the ride. 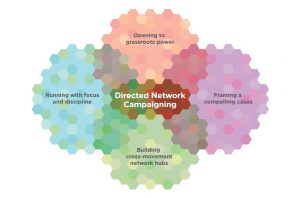 Judging by the practices of all top campaign innovators in our study group, true grassroots participation in advocacy efforts is now a non-negotiable success factor. Campaigns that give supporters an active role and the freedom to customize their participation generate a lot more commitment and enthusiasm and often gain precious insights and give rise to innovations by tapping into the collective intelligence of their crowd.

The following approaches are used by the campaigns we studied to open up to grassroots power.

Giving greater responsibilities and power to supporters and volunteers

This approach essentially entails opening leadership and some management responsibilities to a campaign’s larger network of core supporters. The fact that many supporters now have the will and the drive to self-start local campaigns on their own is an enormous asset for those who take advantage of this new cultural reality. It enables movements to scale well beyond the financial and geographic limits of their core staff structure.

Campaigns that actively consult their audiences and draw on their collective intelligence have access to new assets and power. What would have been an onerous task in the past is now a distinct strategic possibility in an age where two-way communication at the group level is relatively cheap and easy.

Active audience input and listening can take the form of polling supporters on future priorities, letting supporters suggest and initiate their own online petitions, and allowing supporters to generate their own digital campaign content through images and other forms of testimonials. Campaigners that have adopted one or more of these tactics have benefitted from a more involved supporter base that sees its own story and voice out in front of the movement.

Typically, groups that run on this model carefully outline roles and responsibilities for their distributed leadership, prepare a digital “toolkit” for self-starters and convene regular check-ins led by central staff to ensure that problems are addressed and that the overall movement is aligned.

Mirroring collective voices back to your supporters and to campaign targets 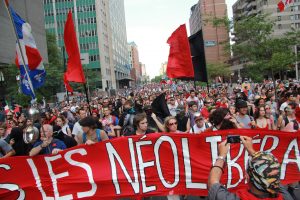 The Quebec Student Strike, one of many case studies in our report. Photo via Brian Lapuz.

A wide base of grassroots support can be a powerful campaign tool as well as a self-reinforcing motivational asset if support numbers are made publicly visible to campaigners and pressure targets alike. Corporate or government targets are vulnerable to large waves of public dissatisfaction, especially when this happens in view of larger audiences. Alternately, supporters are inspired and reassured when they can see that they are part of a much larger movement.

Showing people power often begins with online petitions that garner numbers into the tens or hundreds of thousands until there is sufficient visible support to anchor further online and offline actions around the campaign issue. Alternately and often in addition, campaign supporters are frequently directed to “swarm” a government or corporate pressure target through online and offline messages and to voice their collective desire for social change.

Allowing for customization and adaptation

While many nonprofits and NGOs have adopted marketing practices from the corporate world in which unity of message and staying “on brand” are essential, the successful practices of several progressive campaigning groups point in the opposite direction.

Groups that allow their supporters to customize and adapt campaign messages and visuals to better suit local contexts are showing that flexibility pays off with higher engagement rates. They succeed because they are building networks across geographic boundaries that better respect the distinct differences in culture and approach at the local level.

The above is an excerpt from our 2017 report, Networked Change in Canada. Combined with our original Networked Change Report the study group includes over 60 successful advocacy campaigns from the US, Canada, Europe, and Australia.