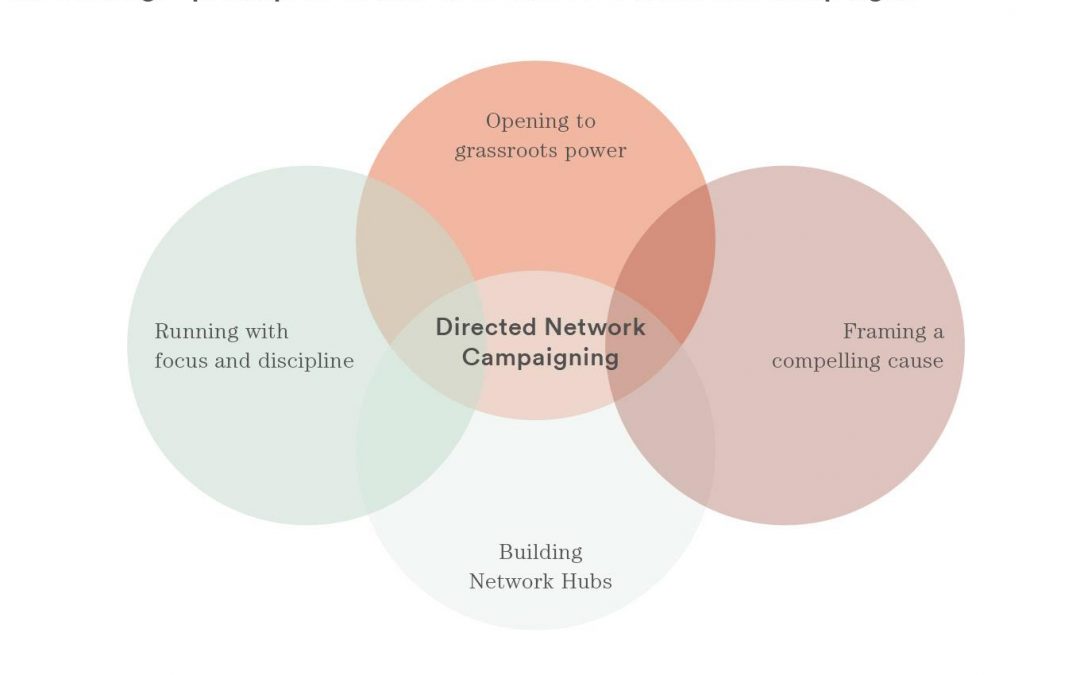 Our Networked Change Report, which maps the strategic patterns behind today’s winning advocacy campaigns is now available for free download. For busy folks, we also just published this summary with the Stanford Social Innovation Review. Below is a copy.

It’s not easy being a systems-busting campaigner these days. Competition for funding is intense, attention spans have shriveled (especially among Millennials), and wicked problems lie behind many of the causes now championed at the national level.

Despite these challenges, new sources of power and grassroots energy are driving certain campaigns to scale with surprising speed and force. What’s more, movements like fossil fuel divestment and the Fightfor15 are gaining ground around climate change and economic inequality—issues that gained little traction in past decades despite considerable institutional attention and investment.

Clearly, this is an era of great opportunity for campaigners, but the way forward is not so clear. In the words of David Karpf, author of The MoveOn Effect: The Unexpected Transformation of American Political Advocacy, “It is definitely easier now to seize a national advocacy moment, but converting that moment into a movement requires strategy and resources.” In past decades, according to Karpf: “Resources were easier to come by but the moments were harder to seize. Now, we have excellent opportunities for moments but often struggle to leverage them effectively.”

Leveraging grassroots momentum toward concrete outcomes seems to be the tricky part, as evidenced by the unfulfilled hopes of Occupy Wall Street or the mitigated record of several digital-first organizations like Avaaz when it comes to delivering policy change on wider systemic issues. People power, we’ve learned, isn’t easy to control and doesn’t necessarily lead to big social change.

We’ve begun only quite recently to observe the emergence of a working model for breakthrough, grassroots-driven advocacy—a model now common to many of today’s most talked-about campaigns. Campaigners are building on people power and rallying diverse networks of support, but also running a focused game that achieves impressive, lasting, real-world results.

At NetChange Consulting, we explore how our increasingly networked society influences those working towards social change. We recently spent several months compiling data on the common strategic elements behind 47 major advocacy campaigns, mostly launched from North America, that successfully won changes to corporate and public policy, or created widespread attitude change. We drew a third of the data from years of direct participation in campaigns, and the rest from interviews with important figures and literature reviews of other campaigns. 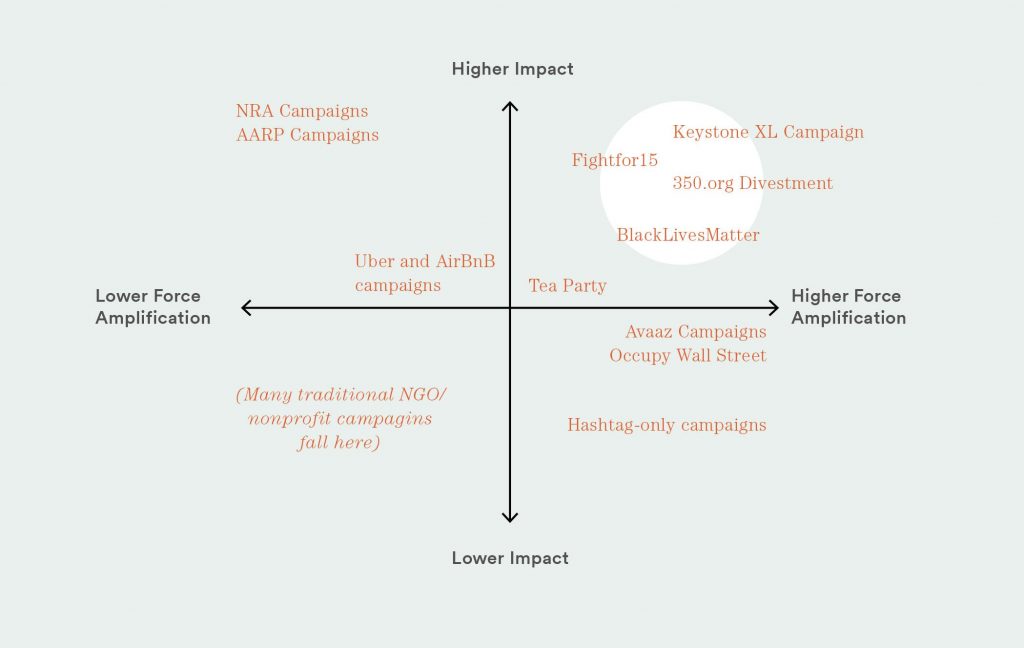 What campaigns have the most impact and force amplification

While trying to identify a model that progressive campaigners could replicate, we looked for innovation and best practices everywhere. We reached beyond our ideological home turf to study campaigns on all sides of the political spectrum; we looked at groups like the Tea Party and corporate campaigns by Uber and Airbnb. We also examined the work of very large and conservative organizations such as the NRA, AARP and US Chamber of Commerce.

Throughout our research, we were particularly interested in campaigns that had started with relatively low resources and went on to achieve substantial victories—a quality we decided to term “force amplification.” Put simply, we looked for campaigns that not only won, but also punched above their weight, in part because—unlike legacy organizations with decades of accrued membership, capital, and power—the work of newer groups that rapidly scaled and dialed up their influence seemed more relevant to today’s resource-constrained nonprofit landscape.

When we mapped the patterns behind high-performing campaigns that demonstrated both policy or cultural impact, and force amplification, we found a common set of strategic orientations and practices. Campaigns in this group tend to share power and decision-making with their supporters, and spend significant time organizing and aligning their wider networks of allies. At the same time, they’re led by active central command structures that control resource management, framing, and storytelling, while also dedicating significant attention to political moments and media narrative work.

We are calling this new framework “directed-network campaigning,” and believe that most groups doing advocacy campaigning today can and should recreate it by:

All directed-network campaigns we looked at open themselves to grassroots power to a greater or lesser extent, and those that give more power and agency to their supporters tend to scale more rapidly. Leaders here, such as 350.org and the Bernie Sanders campaign, draw direction and ideas from their base, allow their supporters to self-start their own chapters, and customize messages and tactics to suit local concerns. Using their people-power tactically to exert pressure, both campaigns regularly direct supporters to converge both online and offline, and swarm their targets at crucial moments of mobilization to show their power. 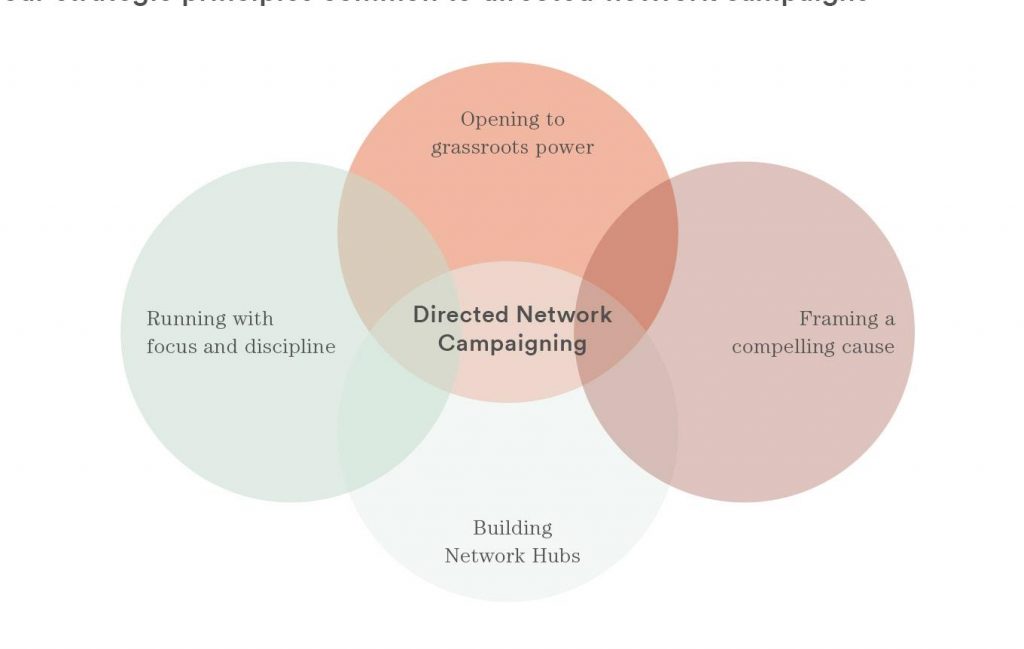 Campaigns such as the Fightfor15 and the movement to stop the Keystone XL pipeline drew a lot of their power from the intersectional networks they built around their causes. Both began by framing their effort in an unbranded way that others could easily adopt, and then brought diverse interest groups into the fold and did the hard work of serving their wider networks. When they focused the collective power of their networks on shared goals, their campaigns ended up mobilizing large swaths of the electorate and, as a result, brought in decision-makers, including the President, to act in their favor.

Powerful storytelling is at the heart of most campaigns that have gained wider traction in our information-saturated society. Masters of this art include Greenpeace and Not1More Deportation; both have succeeded in generating wide public engagement around complex issues. Early on, at the design stage, their strategists focus on “action-worthy problems and solutions” and construct campaign narratives that position supporters as heroes fighting a common enemy, motivated by first-order concerns and deep-seated emotions. To ensure that their stories reach wide audiences in a landscape of splintered channels, these groups are also adept at weaving their messages through traditional and new media channels simultaneously.

In an advocacy landscape where resources are scarce and competition for mindshare is high, successful campaigners turn the quest for efficiencies into a science. Inspired by digital-first groups like MoveOn and Avaaz, many groups are now running data-driven campaigns where they do extensive testing and audience listening prior to deploying messaging and approaches full bore. Equally important for victory is the capacity to stay resourced for the long haul and knowing when to spend one’s capital in moments of true opportunity for a win on their issue. Here, both the Fightfor15 and the Keystone XL coalition played their cards well over the years before arriving at their moments of truth.

While a small crop of first movers is running with the approaches described above, and capturing the attention and the imagination of many in the social change community, our professional experience from working with institutions and campaigns for more than 20 years tells us that many of the more-established organizations we encounter are far behind the trend lines.

A good number of modern nonprofits are out of sync with two important cultural forces that have defined campaigning practice more than ever these past few years: 1) the various effects of a network society on communication and social organization, and 2) the imperatives dictated by increasing complexity and competition in a world crowded with causes.

Nevertheless, large and established organizations can reinvent the way they do advocacy campaigning, and go on to make their mark in the world with renewed relevance and power. Many of the approaches at the core of directed network campaigning are departures from traditional campaigning practice, and as such, will require a shared organizational will to change culture and structure—and a plan for getting there.

There is no catch-all recipe for rethinking one’s advocacy approaches, but for those willing to try the directed-network campaigning model on for size, we suggest a three-step process that includes frankly assessing the current state of campaigning within the organization, finding and reinforcing elements of the model already in place, and then summoning the courage to deploy and support some of these new approaches in future campaigns.

In the tech startup world, innovators test and fail often, but go on to do amazing things as a result. We created our “Networked Change Report” for those campaigning to bring about a more just and sustainable world. Here, the innovation process is similar, but the rewards that come from designing and running breakthrough campaigns will be far more profound.

This article was published in the Stanford Social Innovation Review.