Opening up Leadership at Open Everything 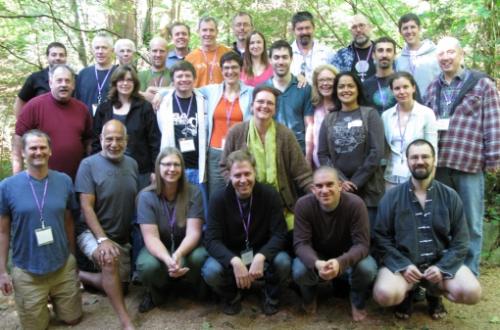 Since its inception in 2001 Web of Change has evolved from a yearly retreat to a series of community building conferences organized by Communicopia. Web of Change brings together tech-savvy social change leaders to hone their skills, connect with other leaders, and refresh their passion for work, change, and innovation. I've just come back from the latest Web of Change conference, held two weeks ago at Hollyhock Retreat Centre on Cortes Island called Open Everything. I had the pleasure of being the logistics coordinator and onsite support person for the event.

Open Everything is an appealing but enigmatic name. In fact the lack of clarity was one of the reasons for the gathering – to get clear on what operating in an ‘open' mode really means. ‘Open' is a buzz word that is used a lot around the internet. Most people are familiar with open source software, open technology platforms, and open resources like Wikipedia where anyone can contribute content. But the work of this event was to explore what is behind the open movement and to see if it produces better outcomes than traditional methods.

Even though I deemed myself to be an open thinker this gathering helped me see where it still scares me to be transparent. So often it is fear and habit that has us keeping things tightly controlled. By sharing ideas early and often you can get input from others that will make the end result more useful and effective for having had varied inputs. It means that the ego has to let go of any need for recognition. When you share an idea it is no longer yours but belongs to the commons. The up side is that then the community has more buy in and enthusiasm for it because they helped create it, and you get better ideas to boot! And let's face it, creating in a group is just plain fun.

Executive coach Jeff Balin led a session on open leadership at the event. He sees open leaders as those that find the intersection between idealism and practicality. There is a healthy tension between the two. Traditional thinking would set the two as opposites but Mahatma Gandhi, Martin Luther King and JFK were all leaders that found a way to make their ideals practical. Open leaders see themselves not as top down authoritative decision makers but as facilitators to a discussion. They aren't threatened by divergent views but welcome differences as a way to represent the whole picture.

Peter Block puts it succinctly in his new book Community – the Structure of Belonging:

Leaders have three tasks: to shift the context in which people gather, name the debate through powerful questions, and listen rather than advocate, defend, or provide answers.

Leadership is a quality that all of us possess. It isn't just the purview of a CEO. The more we can press the release valve on our egos and shift out of a fear paradigm into a collaborative position the more we can all open and grow as individuals and as organizations. For me, ‘open' is a way of being in the world that involves collaboration, transparency, sharing, responsiveness, and fearlessness. I look forward to exploring these issues further at next year's event.

If you'd like to stay posted on upcoming Web of Change events sign up for our newsletter at http://www.webofchange.com/

Still curious about open? Check out other participants experiences of the event: David Eaves, Michael Lewkowitz, Mark Surman and check out our event wiki.