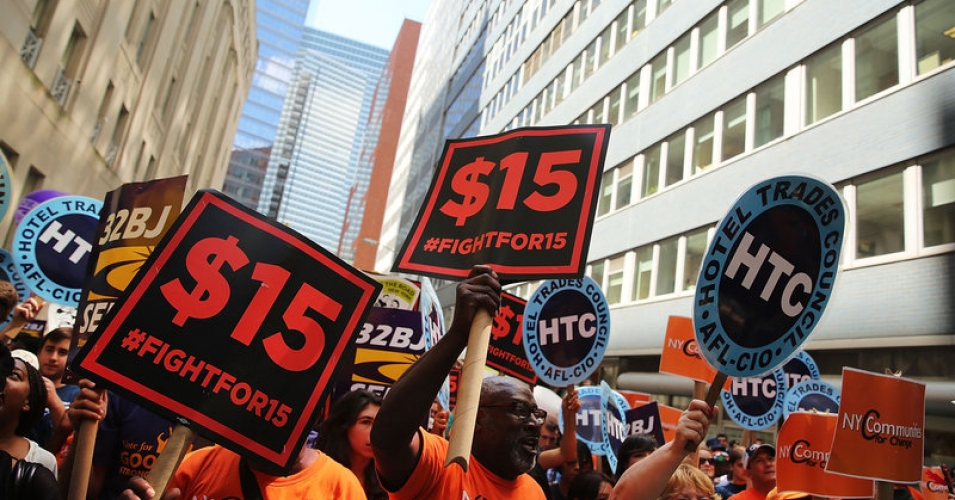 This article was originally published at the Greenpeace Mobilisation Lab.

American unions have been losing members and influence for over 30 years so it’s notable when a labor campaign changes wage policies across the U.S. and forces corporate giants, state leaders, and Presidential candidates to bend to its demands. Using directed-network campaigning, the Fight for $15 campaign is winning unprecedented progress and shifting power in the direction of America’s workers.

ur minimum wage across the United States, and operates in nearly 80 countries around the world.

Robert Reich, former Labor Secretary during Bill Clinton’s presidency, noted that the movement’s organizing strategy and tactics are fundamentally different than other recent labor campaigns. “It’s more decentralized, for one thing, with lots of people getting involved in all sorts of ways,” Reich told us.

Fight for $15 is also breaking ground using directed-network campaign strategies similar to those used by other effective campaigns we’ve studied around the world.

The Networked Change Report: A blueprint for 21st century campaigning

NetChange readers know we recently completed a deep dive into 47 campaigns that achieved some degree of policy or cultural change while punching above their weight in our Networked Change Report.

While we looked at big institutionals like the AARP and grassroots upstart movements like Occupy Wall Street, we were most interested in newer campaigns that ran on a mix of grassroots power and central strategic control. It’s a model that we call “directed-network campaigning.”

In a nutshell, directed-network campaigning is a hybrid of top-down and bottom-up mobilization that marries old power with new. Exemplified by the Bernie Sanders presidential campaign, 350.org, and Keystone XL, they enabled extensive grassroots-led initiatives, while at the same time centrally framing their causes and directing campaign momentum towards sharp political opportunities and outcomes.

We found the strategic and tactical approaches common to all directed-network campaigns can be grouped into four principles. These include opening to grassroots power, building cross-movement network hubs, framing a compelling cause and running with focus and discipline.

Fight for $15 roots itself firmly in each one of these areas.

Opening to grassroots power, the Fight for $15 uses a distributed model to spark local worker-led protests and strikes all across the country. These self-starting events are supported by resources such as “how to start a local strike” guides and support staff who train local leaders. The result is a vast constellation of city and state-based Fight for $15 groups across the U.S. and several other countries, each with its own local branding and messaging. The voices of local organisers and worker-activists are heavily favored over those of union bosses in movement communications and press work.

From the beginning, Fight for $15 was configured to make wider adoption by cross-movement networks possible and probable. Whereas traditional union drives focus on rank and file members, Fight for $15 opened up to workers of all sectors on the low end of the pay scale, including many not affiliated with the SEIU. Campaign organisers made conscious efforts to reach out to Occupy Wall Street sympathizers and the Movement for Black Lives (Black Lives Matter), lending their support on the streets after racial justice protests erupted in Ferguson, Missouri. In this way, they brought a diverse and powerful alliance of outside groups to support the workers during strikes and marches.

Fight for $15’s approach to issue framing also helps explain its appeal beyond labor circles. By lining up with larger issues of social and racial inequality as well as economic injustice, Fight for $15 plugged into deeper social currents already active in the U.S. The campaign chose as villains big corporations that could afford to pay higher wages (Walmart and McDonalds). These companies became focal points for organising actions. Using clever storytelling, the campaign exposed scandalous corporate worker policies, such as McDonalds encouraging its workers to use food stamps, to help underline the basic injustices that low-paid workers regularly face in America.

While clearly open to local leadership and wider cross-movement input, the Fight for $15 also runs a tight ship internally. Along with the financial and staff resources SEIU provides, Fight for $15 partners closely with experienced campaign consulting and public relations firms. Together, leaders centralize planning to guide local groups towards shared moments and milestones such as their April 15th cross-country strike actions. This coordination helps ensure that the Fight for $15’s impact is felt at the local, state and national levels as all play crucial roles in American wage policy decisions.

Hopefully, the Fight for $15 will inspire others to open up campaign tactics and to reach for greater impact. Many organizations today rely on a traditional top-down campaigning model that struggles to integrate people’s contributions and build power.

Fight for $15 shows how a sizeable organization, in this case a union, can experiment with new hybrid campaigning models that maintain some controls over strategy, timing and framing while unleashing the energy of self-starting grassroots supporters. The results have been encouraging. With wide cross-sector support and an engaged grassroots base of affected workers, the campaign is finding ways to scale up power to match the scope of the problems facing American workers.

A more in-depth version of this article is at Greenpeace’s Mobilisation Lab blog. You might want to join their epic email list on campaign innovation, one of the best in the world.